A couple weeks ago, I started lane swimming again at my local community pool. And it’s been an interesting experience seeing the variety of people and various social interactions that go on at the pool. At my pool, it’s primarily a social/relaxation time as it’s mostly old Chinese people who go and swim (or rather chat and hang out in the water). After being there for a couple weeks now, I thought I’d put together some random observations of the things that go on at the pool:

1. The slow lane is really, really slow
These people just sort of seem to flounder their way down to the other end of the pool, going even slower than an inner tube along a lazy river. And while it looks like they’re kicking and moving their arms, they don’t seem to really go anywhere. I even saw one person who was “swimming” down to the other end by pulling themselves along the lane rope the entire time.

2. The medium lane is not much faster, and is usually very clogged with people
The medium section takes up the middle 2 lanes and usually has the most amount of people in it. During busy times, it gets super clogged up with people doing all sorts of weird combinations of strokes (if it can even be called strokes). Also, the area at the end of the pool at the shallow end is usually filled with people hanging out doing way more chatting than actual swimming.

3. The fast lane handles the overflow from the medium lane, and again isn’t really that fast and has the biggest variation in speeds. The worst is when you get stuck behind slow swimmers who don’t let you pass at the ends and the people who shouldn’t be in the lane clogging it up for everyone else there.

Now that you have a basic idea of what the pool is like, there are a couple of interesting types of people the pool attracts.

Types of Swimmers
1. The “I’m going in a lane that’s beyond my speed and I don’t care” swimmer
There seems to a couple people who like to move into the fast lane to try to have a semi clear lane to swim in, but don’t realize that the speed is beyond their abilities and don’t adjust accordingly (i.e. let people pass, get out of the lane, or swim faster). These people are super frustrating to get stuck behind as there’s not much you can do.

2. The mind-boggling “non swimmers”
I’ve dubbed this category the kind of people who are at the pool, but doing things that defy explanation. Here are a couple examples:

4. The passive-aggressive swimmer
This kind of swimmer usually swims 1/2 a length (in the fast lane) and then turns around in the middle of the pool to avoid having to swim behind a slower swimmer or avoid getting stuck behind one of the swimmers listed above. I think of these people as being too slow to actually pass the swimmer in front of them, and passive aggressive to avoid any type of confrontation whatsoever. It’s quite funny (but super frustrating) when you see 2 or more swimmers turn around in the middle of the lane to try to avoid the congestion right at the same time, making it even worse by clogging up the entire lane and not making their situation any better.

5. The fancy gadget swimmer
These people have interesting gadgets like hand paddles, flippers, or other weird swimming gadgets, but really don’t utilize them to their full extent. I think they would probably be better off without them, but it’s their decision to use whatever gadget they want. 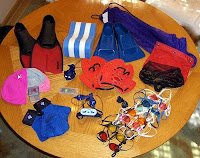 6. People there who are actually serious about swimming.
This is the rare category where people are actually there for the primary purpose of swimming. And by swimming, I mean going for a workout rather than going for just a relaxing couple of lengths. I like to consider myself in this category as 90% of my time there is spent swimming, rather than resting or chatting.

Swimming at the public pool has been an interesting experience, but something I quite enjoy doing. Miraculously, I’m able to drag myself out of bed 2-3 times per week for these early morning swims and I have seen some decent improvements in my stroke. And despite the frustrations of the other types of swimmers at the pool, it’s an enjoyable experience and something I intend to keep up.