We return again to an ongoing series of some of my favourite poems. These get published every so often. Do you have a favourite poem you want to share. Let me know in the comments!

The Road Not Taken

Two roads diverged in a yellow wood,
And sorry I could not travel both
And be one traveller, long I stood
And looked down one as far as I could
To where it bent in the undergrowth.

Then took the other, as just as fair,
And having perhaps the better claim,
Because it was grassy and wanted wear;
Though as for that the passing there
Had worn them really about the same.

And both that morning equally lay
In leaves no step had trodden black.
Oh, I kept the first for another day!
Yet knowing how way leads on to way,
I doubted if I should ever come back.

I shall be telling this with a sigh
Somewhere ages and ages hence:
Two roads diverged in a wood, and I–
I took the one less travelled by,
And that has made all the difference.

About a week ago, I got a box full of napa cabbages from my aunt’s farm and was thinking of ways to use them up. Many were given away to friends and family, but a good number of them, I decided to set aside and 5 of them and make some homemade kimchi. It’s actually much easier than I thought and doesn’t take too long either. Here’s the “recipe” that we used, based on Evelyn’s grandmother’s recipe.

As a side note, these are all estimates as we just started chopping and mixing and tasting the mix as we went. You want a good balance of salty and spicy to go along with the flavours of the other ingredients. Think about kimchi that you eat at various Korean restaurants – what does it taste like? Do you prefer it saltier? Spicier? Use that as a general gauge of how the sauce tastes.

And now for some pictures for your viewing pleasure: 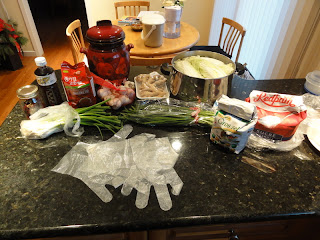 mise-en-place (of the raw ingredients at least) 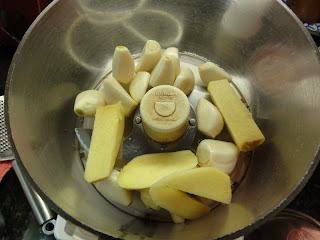 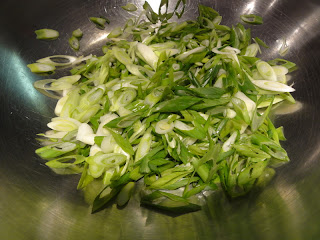 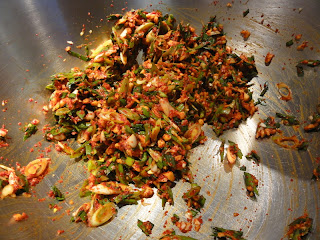 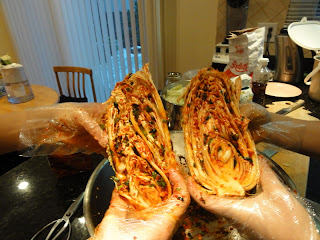 shoving the sauce into all parts of the leaves 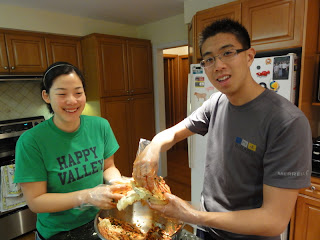 hard at work in the kitchen 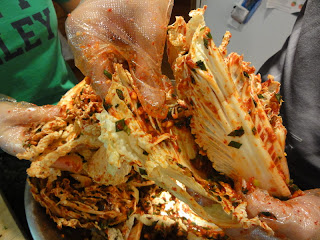 rubbing that oh-so-delicious kimchi sauce into the cabbage leaves 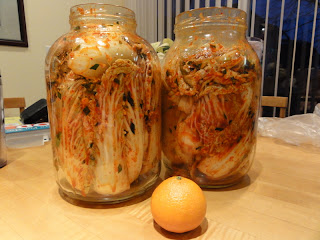