I’ve been in New Orleans for almost 48 hours now and found a bit of time for this quick update. Overall, the city is a lively place with an almost palpable atmosphere I would describe as that warm fuzzy feeling you’re having a good time surrounded by people who know how to enjoy life. Maybe this is what people mean when they talk about Southern hospitality. People here are friendly and never seem to be in a rush (except maybe the tourists).

For some background information, the reason I’m in New Orleans is to attend the 14th Annual Community Food Security Conference. I’m helping to represent the Toronto Youth Food Policy Council in leading a workshop on Monday afternoon on “Engaging Youth Within the Food Policy Framework.” While much of the time so far has been taken up with the conference, I did have some time to explore the town after I got in Friday night and a bit on Saturday afternoon.

For the most part, food, beverage, and jazz have been the dominating themes of the past little while. In fact, as I’m writing this, there is a marching band walking down Canal St (one of the main streets in New Orleans). In regards to food, Southern food is full of rich, fried, morsels of tasty goodness. Some of the interesting things I’ve had while here is blackened alligator, gumbo, red beans and rice, crab cakes, Rockefeller oysters, cochon au lait , and biegnets. Things I have yet to try are jambalaya, crawfish, crabs and po boy sandwiches. Yes, eating and food is a passion of mine and I’m glad my metabolism still allows me to enjoy all of this without too many ill effects. Pictures, descriptions, and tasting notes coming soon. Food here seems to be more expensive than other cities (ex. a street dog cost around $5 or $6 from the French Quarter).

In regards to drinking, Friday night was by far one of the wildest nights I’ve had in a while. We started off with a local beer Abita www.abita.com. I tried one of their “harvest” beers, a Sasuma Belgium Wit, which features local Louisiana ingredients. It was surprisingly tasty. An interesting side note is that it appears to be the case that open beverages are allowed and openly consumed while wandering the streets.

One of the more interesting things we tried to liven things up was a local cocktail named “The Hand Grenade”. It comes in a special plastic cup that the Lonely Planet describes as “a mix of melon liquer, grain alcohol, rum, vodka, and God knows what else. Suffice to say, two or more will destroy you”. It was a seriously strong drink. A few other things I want to try are the chicory coffee from Cafe du Mond, and some more local beers. 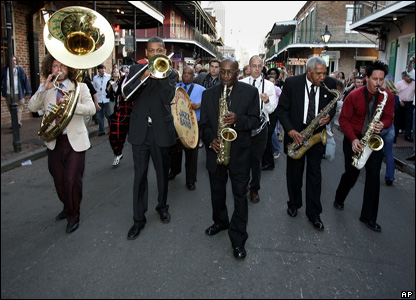 For jazz, I’d had the most excellent fortune of being in the right place at the right time (though that never is too hard for a city known for its live music culture). On Saturday, I followed my nose to Lafayette Square where a Blues fest was rocking away. Two stages were set up, and locals and tourists came prepared with their lawn chairs for an afternoon of blues music. Another very cool venue I stumbled onto was at the New Orleans Jazz National Historic Park. Free concerts happen on a regular basis, and I was lucky enough to catch the last one of the day and also the last one playing while I’m here in New Orleans and was treated to a concert by a brass jazz band. The musicians alternated between singing and playing their instruments and it was a great break from the extensive walking tour I took around the city that afternoon.

That’s about it for now. Pictures, better descriptions, and notes on the conference coming soon! Stay tuned.

This afternoon, I had a chance to celebrate the harvest with Slow Food Toronto (http://slowfood.to/)  and Evergreen Canada (www.evergreen.ca/ ) at their 5th (?) annual picnic event. This year’s event / fundraiser was held at the newly renovated and revamped Brickworks near the heart of downtown Toronto and featured over 60 chefs / restaurants / producers from throughout Southern Ontario. This post is sort of like my review of the event and chance to put my thoughts in writing while all the delicious food memories are still fresh on my taste buds.

With 1000+ guests, 80+ volunteers, and 60+ exhibitors, it was an amazing celebration and coming together of people around local food in the province. I saw a number of familiar faces nestled amongst the various organizations / restaurants and for the most part went around enjoying and gorging myself on the variety of dishes being served. 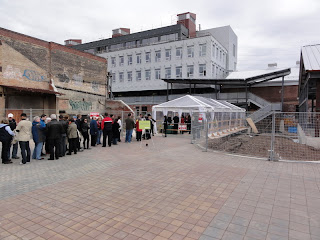 (the lineup for the event stretched waaay back, doors opened at noon)

The way it works is that you’re given a glass at the beginning of the event (don’t lose it as it’s your ticket to enjoying all the tasty beverages on offer) and you go around to the different tables sampling as many dishes as your stomach can handle. Most people, myself included, had to take a couple of breaks from the food in order to 1) make space in your stomach for more, 2) give your taste buds a rest before another onslaught of deliciousness and 3) take in the festive atmosphere and live music of the event. You’re welcome to take as many as you want, though in practicality you wouldn’t want to as it would be almost impossible to try everything if you did go for multiple samples. The portions are quite small in size – some one bite samples, while others were a little larger with multiple opportunities to taste the delicious flavours. 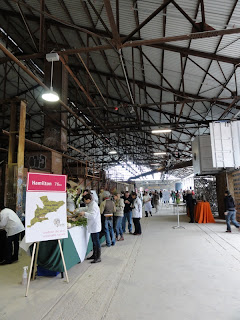 Today’s event was a little on the chilly side and I’m very glad I dressed warm enough with several layers for the weather. Even though it wasn’t super cold, being outside for several hours or rather in unheated areas definitely can get to you. Everyone who came was in a joyful mood, being very patient and cordial in lining up and taking the time to really slow down and enjoy the food (it is a Slow Food event after all!)

The event was grouped by region, with the following regions being represented (see map below for details). 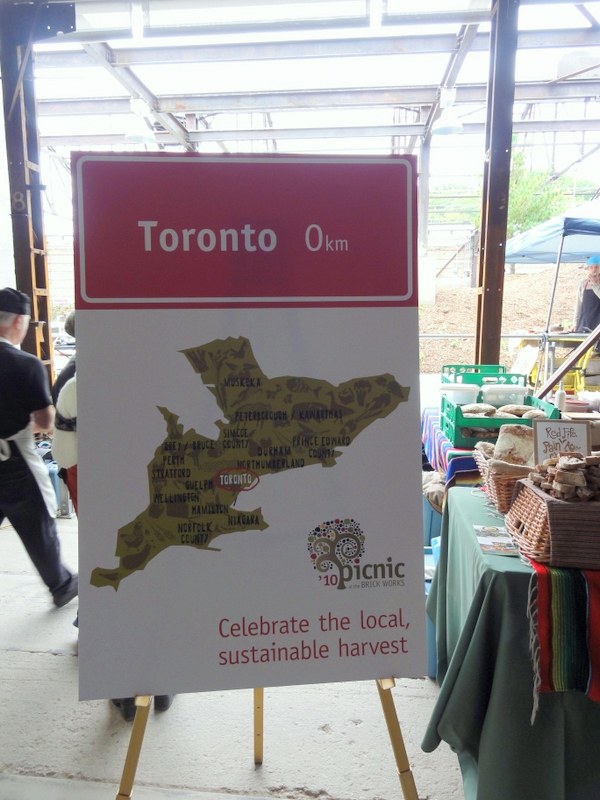 So without further ado, here’s a visual feast for those of you who want to see what it was like of only some of the things I sampled at the picnic. 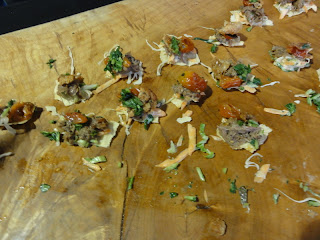 I don’t remember what it was, but it was one of the first things I tried and was super tasty. I believe it was from the Hamilton region. 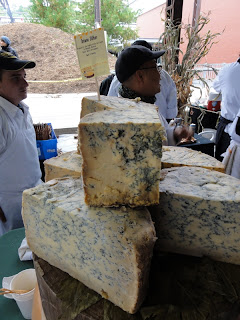 This was from the cheese boutique in the West end of Toronto. The blue cheese they had on a thin triangular shaped cracker was mild, creamy, and delicious. 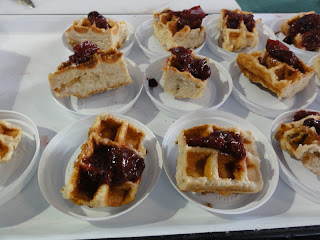 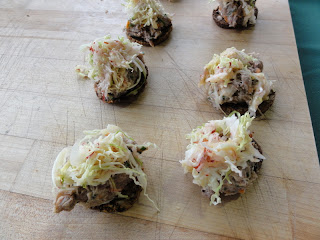 I think this was pork with a apple cabbage slaw on top. It was one of the best dishes at the picnic. 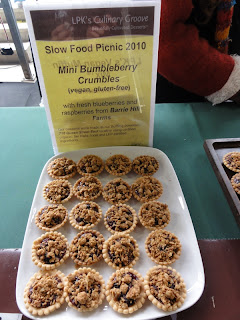 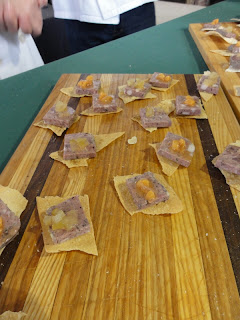 Country style Berkshire pork and liver terrine on fennel flat bread. Garnished with Ontario peach chutney and pickled apples. As a side note, I noticed most of the food was presented on long thick slabs of wood – some quite fancy and intricate. 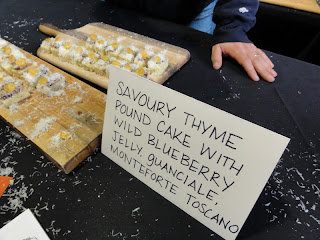 I realized that in order to remember some of the food, I needed to take a picture of the description of the food, and not just the food itself. This was also delicious. I could taste it was made with real butter and had excellent taste, texture, moisture content, and overall deliciousness. 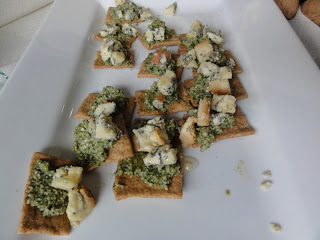 Another dish that escapes my memory of what it was. This was created by the folks at the Culinarium 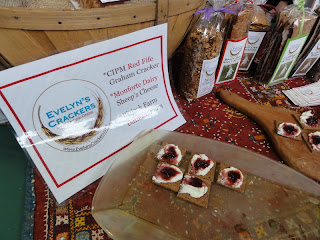 Red Fife graham cracker with Monteforte Dairy Sheep’s cheese with Bizjack Farm dansom plums. A beautiful showcase of local food in a bite-sized cracker. The balance of tastes, textures, and flavours all in this one cracker was stunning. 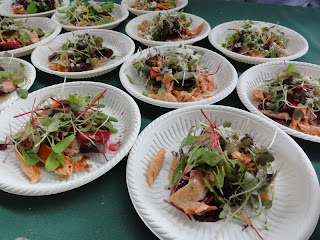 Milford Bay Trout with micro greens and I think a vinaigrette dressing. One of the best seafood dishes here, though the sturgeon caviar (not pictured) and sturgeon ceviche (also not pictured) was my favourite. 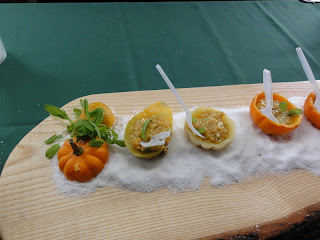 Squash and baby leek risotto with wild boar. Interesting meats were featured in a number of dishes at this event. I like how it was presented in  hollowed out mini squash. 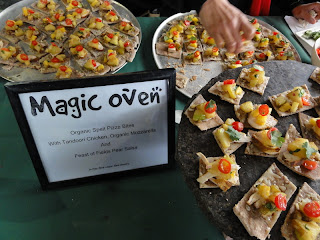 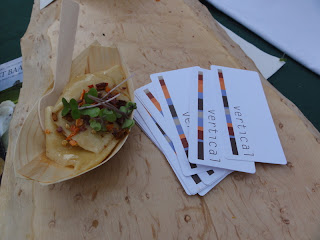 I don’t remember what this was, only that it was delicious, 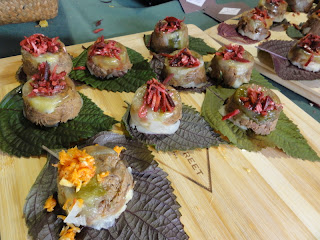 The description for this was Timbale of homeplate organics. Beef and carron forms, root vegetables, horseradish carrot slaw. The leaf that this dish was presented on was also edible and quite tasty. I’m going to email the chef and see if I can grow it for next year, 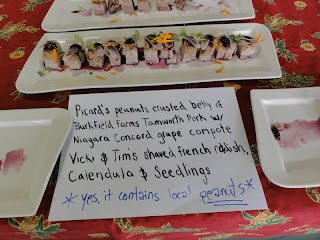 These were the majority of the pictures that I took. Some other delicious things that I tasted that I remembered include:

-Oviinbyrd Inn / Moon Bay Shiitake: This place had a scrumptuous shiitake mushroom topped morsel as well as some tasty chocolate (separate from the shiitakes). This was one of the best shiitake dishes I’ve ever tasted.
-Chocosol fried blue corn tortilla filled with chocolate
-The Gladstone hotel’s chicken spring rolls. Tasty with just the right crispiness
-An interesting risotto with another interesting non-mainstream meat (forget what kind it was thouh))
-Fifth Town Artisan Cheese. Tasty, though I liked the sample plate they had better at the conscious food festival event
-Pork belly on a stick. Mmmmm, pork belly
-Hot chocolate from Soma.Very rich, thick, creamy, and was like drinking some of the best chocolate in the world

Other Beverages:
There were lots of wineries and breweries at the event, and unfortunately wasn’t able to try every one. Some of ones that I remember were:

-Pumpkin ale. Made with roasted pumpkin, cinnamon, clove, and allspice. The pumpkin taste was good, coming through in more of a mellow way towards the end of each sip
-Cranberry blueberry wine. A little sweet for my liking, but good nonetheless

2 hours of sampling later, and going around to almost every food table (I think there was only one or two that I missed), my stomach felt like it was about to explode. Ok, not literally, but full to the point where you just want to sit down for a couple hours and just let the food digest. Let’s just say I was one of the happiest people at the picnic at that point bursting with so much beautifully crafted and carefully prepared local food.

For someone who almost never skips a meal, I was too full to even think about eating diner, though I did have a small salad from one of my gardens for my dose of greens to help balance all the rich and delicious meats and proteins I had during the day. This was definitely a fantastic food experience and one that I hope to experience again next year.