September has been a fun month full of social activities, mostly revolving around food. It saw the end of my summer ultimate season, stuffing my face on several occasions, hanging out with old and new friends, and seeing the weather transition into fall. Here’s a (not so quick) recap of some of the interesting things I did this September.

1. Pulled Pork and Sangria BBQ
For the Labour Day Weekend, I decided to host a BBQ at my place. Though no actual grilling or BBQ’ing took place, instead I ended up making pulled pork in my oven, and a creamy coleslaw (not in the oven) to go along with it. After a bit of research, I decided upon this recipe from the Food Network. Overall it was a good recipe, though if I were to make it again, I would probably lower the cooking temperature and increase the cooking time to get the meat more tender and juicy. When I cooked the pork, my oven has a fancy probe attachment that you stick right into the meat to determine the internal temperature and found that cooking at 300 brought the meat up to an internal temperature of 170 much, much faster than the recipe suggested (like 3.5 hrs vs 6 hours). The only other time I made pulled pork, I cooked the meat at a lower temperature for a longer period of time, and the meat seemed to be much more tender and juicy. I think the moral of the story is, low an slow for best results.

A couple days later, I discovered that I used the probe wrong by sticking it in horizontally into the meat. I was right in sticking it in to the thickest part of the meat, but I should have put the probe in vertically as the horizontal approach allows for more of the tender juices to leak out the side vs. from the top.

A huge batch of sangria was also made, which helped to balance out the rich and heavy feeling of the slaw and pork. Overall, I would definitely do this again. It was a simple meal to prepare, cook, and cleanup, the food was tasty, company was fun and entertaining as expected, the pork shoulders were a surprisingly inexpensive cut, and I ended up with some extra bottles of wine as well. 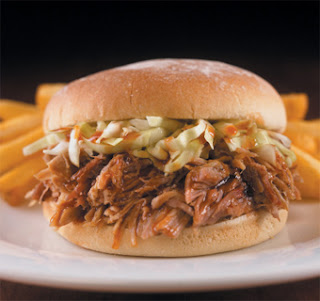 2. Hispanic Fiesta
Early in the month, I went to go and check out the Hispanic Fiesta happening at Mel Lastman Square (http://www.hispanicfiesta.com/). Despite a threat of rain, there was live music from a variety of performers, interesting food from vendors featuring hispanic dishes (think lots of grilled meat, pulled pork, churros, grilled corn, etc). 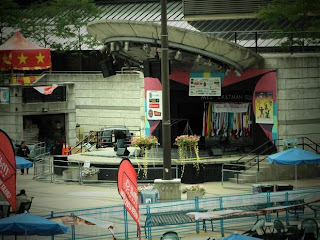 3. End of the Summer Ultimate Season
September marked the end of the summer frisbee season with a day of playoff games early Saturday morning. While I was pretty disappointed that we weren’t seeded in the championship bracket (despite being ranked higher than another team who was in the bracket), it was still a fun day nonetheless. We ended up winning our first and last game, though lost our second one. I was a little surprised by the caliber of the Tuesday West division as it was much higher than the Tuesday East we normally play in. While the outdoor fall season has already started, I’m taking a bit of a break until the indoor fall season starts for me mid-November. 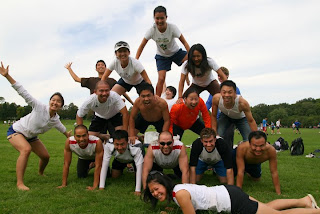 4. Pig Roast celebration
In honour of finishing another ultimate season, we decided to have a team pig roast after the tournament to celebrate. While I have to admit we didn’t roast the pig ourselves (we had a Philippino restaurant in Scarborough roast it for us), we did make sure the pig came whole for us to chop into individual portions. It was definitely a bargain too, weighing it at 40lbs and costing only $140.

The pig came stuffed with lemongrass, and a few of us spent some of the previous day preparing some other side dishes. When it came time to cut the pig, I “generously” stepped up to volunteer my services. I say generously because at first it seemed no one really knew what to do or where to start. Not that I knew any better, but I tried to look like I knew what I was doing and before long, individual pieces/portions started to get cut away from the back of the top. Now comes the generous part (though it really just happened this way and was not something I had planned at all, promise!). After everyone had gotten their first portion, I decided that it was time to get in on some of this little piglet for myslef and allocate some of the choicest cuts of pork including the belly, cheek, and ribs. Since we were cutting from the top (back) of the pig, and no one had requested any of the other cuts, all of the best areas were still ripe for the picking! Not wanting it to go to waste, I decided to scoop some of them up for myself. And man oh man, was it ever tasty! I can’t even find the words to do this justice in how good it was.

For fun, I also tried the ear (a little burnt on the tips and very fatty near the base) and the tongue (a bit chewy and actually very good). A couple other observations about the pork. The belly was by far the most tender and delicious. The cheek was not as tender as the belly, but also quite good. The ribs (and other bony areas like the shoulder legs) were meaty and delicious, though not quite at the “fall of the bone” stage of tenderness. Most people on their first serving got cuts from the back of the pig (blade end, center loin, and sirloin) which is much leaner than some of the other areas. I would say 90% or more of the pig was eaten that glorious and gluttonous night. 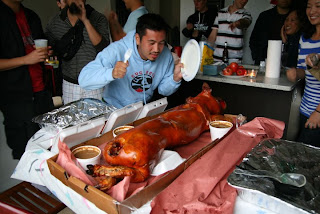 6. Orchestra Practices
September also marked the beginning of the orchestra season. I wrote about it earlier (http://thetaoofchris.blogspot.com/2010/09/orchestra-update.html), and forgot to mention that we’re also playing some music from “The Chronicles of Narnia” in addition to other Halloween-themed music. For anyone interested in coming to my first concert in probably 5+ years, book off the afternoon of Saturday October 30th for a goblin and fairy inspired music. 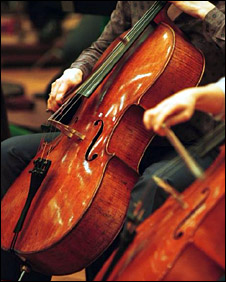 7. Gladstone Harvest Wednesday
Right in the middle of the month, I went to participate the Gladstone Hotel’s Harvest Wednesday event where executive chef Marc Breton takes fresh produce from local farmers and showcases it along with local meats, cheeses, wines, and beers from other local vendors. We setup a table there are participated in most of the samples, though I was a bit underwhelmed by the food selection (or maybe it was just that lots of people showed up and it was difficult to get some of the food before it was all snatched up). Either way, it was an interesting experience that I’m happy I had the chance to attend. 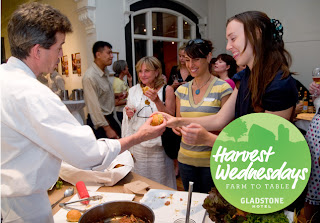 As I think back on September, it has really been a month of food. Unfortunately I missed the boat on mooncakes from Chinese New Year, though had a delicious Chinese banquet meal with my family and family friends to celebrate my Grandma’s 80th birthday to make up for it. Oh yeah, and if I haven’t talked enough about food, I wrote an article for Food Trotter that got published at the beginning of the month too. Did I mention I like eating food?

Alright, that’s it for this month and enough about food for now.In parting, I’ll leave you with this quotation by Virginia Woolf, the early 20th century British novelist and essayist.

“One cannot think well, love well, sleep well, if one has not dined well.”

I think I mentioned this in an earlier post that I joined a community orchestra for this upcoming season. It’s a a new activity for the next year (Sep-June), and a decision I’m really happy I made to brush the dust off my cello and get playing again. How exactly I managed to skip the audition process is another story, but more relevantly, this week I went to my first orchestra practice. I didn’t really know what to expect or how it’d go, but I did manage to hack my way through most of the music and not play too badly out of tune!

This practice was a read through of the new music we’ll be playing for our first concert coming up at 3pm on Saturday October 30th (mark your calendars if you want to come!). It’s a Halloween themed concert, titled “Goblins and Fairies”. I didn’t really know what to expect of the music, but was pleasantly surprised by a relatively extensive and fun list of songs.

Here’s the repertoire for the performance and links to some youtube videos if you want a preview of what it will sounds like. Most of the music should be familiar to most people.

More details on the orchestra can be found here: http://www.rhpo.ca/